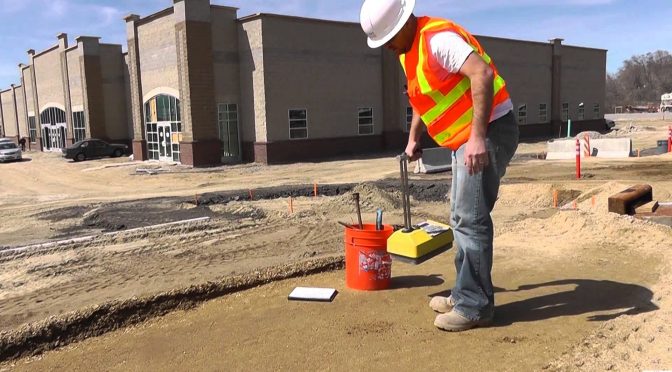 Earthworks Inspection and testing Requirements; what’s the difference between Level One and Level Two?

Occasionally  we get asked for level one reports when a block we’ve filled for a developer is sold to a new owner planning to build a house on the block.

Explaining the different levels of inspection and testing is usually a fairly simple process, but every now and then, a lay-person needs just a little more in depth explanation.

Inspection and testing requirements for block or allotment fills are clearly defined in “AS3798-2007 Guidelines on earthworks for commercial and residential developments”. You can purchase the standard here and it’ll tell you every thing you need to know.

If all you need is a quick rundown of the difference between level 1 and level 2  and you’d like it without all the technical jargon,  keep reading…

In simple terms, level one is where the appointed geotech (the standard calls this a GITA – short for geotechnical inspection & testing authority) supervises the earthworks including  the removal of topsoil, the placement and compaction of fill, trenching, backfilling, proof rolling and testing. On completion of the supervised works,  the geotech provides a report containing details of  inspections, samplings and the locations and results of tests undertaken during the works.

Level one inspection and testing, often referred to as level one compaction or just level one must be done during the earthworks.  A level one report cannot be produced if the earthworks were not completed under level one conditions.  These are usually specified by the engineer and you can find this in the notes on most earthworks plans.

The fill placed under level one supervision is  classed as “controlled fill”.

Under level two, a geotech is appointed to carry out sampling and testing either as required  by the superintendent or as specified by the engineer on the plans.  The superintendent is the person in charge of the operational works and is responsible for notifying the geotech when and where to test the placed fill.

On completion of the earthworks,  the geotech provides a certificate or certificates setting out the locations of the various sampling and testing undertaken and the results of each test. This is usually referred to as a compaction certificate.

Under level two,  it is the superintendents  responsibility to ensure there are sufficient tests and samples taken over the project to satisfy the fill requirements outlined on the plans.

The fill placed under level two testing is  classed as “uncontrolled fill”.

It’s important to balance the frequency and extent of testing and test rolling with the fit-for-purpose requirements of the earthworks because testing can be both expensive and time consuming and can quickly add unnecessary time and cost to the project.

Want to know the difference between 95%, 98% and 100% compaction? Keep an eye out for our next blog post where we explain it in plain English!